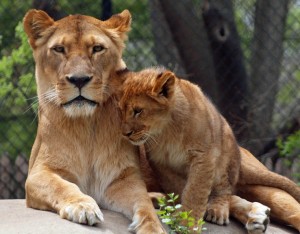 Madison’s Henry Vilas Zoo is mourning the death of Vilas, the zoo’s 16 year old female African Lion. Beloved by zoo staff and a favorite of visitors, Vilas arrived at Henry Vilas Zoo in 1997 where she joined Henry, a male lion, as the first residents of the zoo’s newly renovated Big Cat Exhibit.

The pair helped to educate the public, and preserve the species. Beginning in 2003, Vilas and Henry successfully raised eight cubs. Seven of those cubs were transferred to other zoos including the Milwaukee Zoo, the Racine Zoo, The NEW Zoo in Green Bay, the Topeka Zoo and the Tautphaus Park Zoo in Idaho Falls, Idaho.

Vilas’ last cub Leo, born in December 2010, remains at Henry Vilas Zoo along with Henry. Vilas’ health had declined dramatically due to the development of an aggressive mammary carcinoma, which had spread to her lymphatic system, according to the office of Dane County Executive Joe Parisi.

The Henry Vilas Zoo is working with The American Zoo and Aquarium Association’s Lion Species Survival Program to find a new female Lion to accompany Henry.