You are here: Home / Brewers / Braun is set to represent the Brewers in All-Star game tonight 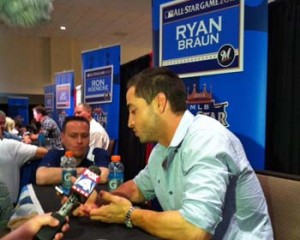 Braun’s appointment is well deserved after hitting .306 in the first half with 24 home runs and 61 rbi’s.

Braun’s first at bat tonight will come against Detroit’s Justin Verlander, who has been named the American League starter.

Braun had been voted in as a starter in the previous four all-star games.  This time, he was elected by the players because Matt Kemp of the Dodgers had to pull out with hamstring issues.

The winner of tonight’s game gets home field advantage in the upcoming World Series.