You are here: Home / News / Cullen returns to his caucus 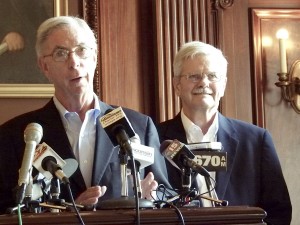 Just three days after Senator Tim Cullen announced his decision to leave the Democratic caucus because he felt snubbed when committee leadership roles were assigned, the Janesville Democrat rejoins his colleagues. “I’m very pleased to be back in the caucus and I feel wanted in the caucus and … that’s a very good feeling.”

Cullen had said on Tuesday that he’d consider becoming an independent after he felt insulted when he didn’t get the committee chairmanships he wanted, but on Friday afternoon Senate Majority Leader Mark Miller (D-Monona) announced Cullen will chair two newly-created committees and have prominent roles in two others. “Senator Cullen and I are both grown-ups and I’m really pleased to be at this point. It’s time for us to put this behind us and move forward and I look forward to doing that.”

Cullen says he regrets that the “little squabble” dragged out for a few days, but is happy it’s resolved and he’s pleased with his new committee assignments. Miller takes some responsibility for the feud, saying he’s “new at this job” and perhaps “could have dealt with it better.”