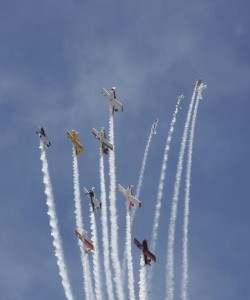 AirVenture pumps up the economy and leads the way for international tourism.

About 1/2 million aviation enthusiasts come from all corners of the state, across the nation, and 60 countries for EAA’s AirVenture in Oshkosh. Wisconsin Department of Tourism Secretary Stephanie Klett says about 70 percent of AirVenture visitors are from out of the state, with a huge international representation. “When you go to EAA you’re gonna see folks from New Zealand, Australia, Africa, Brazil. In fact, they have these campsites where they have the flags of different countries, and they have over 60 flags. And why this is a big deal for the Department of Tourism is that international tourism is becoming a very big deal.”

Last year international tourism generated over $600 million in travel expenditures in Wisconsin. Klett says people traveling from overseas like to stay several weeks or more, and there’s plenty for them to see in the Badger State. “Some of the visitors that I’ve personally met are staying in Wisconsin for a month.”

AirVenture brings an estimated $110 million economic impact to Oshkosh-area counties each year, according to a study conducted by the University of Wisconsin-Oshkosh in 2008. “Winnebago  County, this last year, was ranked in the top ten counties for travel expenditures. They had over $202 million of travel expenditures and a large portion of those travel expenditures come from EAA. So it’s a significant impact and driver for Winnebago County in particular.”

Spokesman Dick Knapinksi calls EAA a crown jewel, very different than almost any other event in the state.