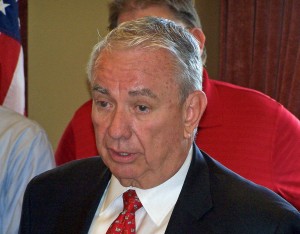 Former Governor Tommy Thompson took some swipes Friday, at an opponent in his U.S. Senate race. While polling may give Thompson the edge in the four-way Republican primary for the seat being vacated by Senator Herb Kohl, Thompson was not pulling any punches. “I don’t think any of the other three candidates can win,” he said during a press conference at the Captol, where he announced a slew of endorsements from business and agriculture groups. “None of them ever won statewide, and I’ve won five times.”

Democrats are fielding Congresswoman Tammy Baldwin as their candidate, and Thompson claimed businessman Eric Hovde would not fare well in that matchup. “The Democrats will slice and dice Mr. Hovde in so many different ways, with where he comes from, what he stands for, that I don’t think he stands a chance,” said Thompson, who quickly backed off the statement. “I’m not going to say that. I think the best bet is electing someone who’s won the state five times.”

Thompson referred to comments made by a political scientist at the University of Virginia, Larry Sabato. Sabato has predicted a likely Thompson win over Baldwin, but a less clear outcome should one of his opponents win the August 14th primary. “He said that if Tommy Thompson wins, the seat leans Republican. If any one of the other three candidates win, it will lean Democrat,” he said.

In addition to Hovde, Thompson faces former congressman Mark Neumann, and Assembly Speaker Jeff Fitzgerald. The latest Marquette Law School poll indicates Hovde remains Thompson’s most credible challenger – with a lead among likely GOP voters who identify with the Tea Party, or who describe themselves as very conservative.