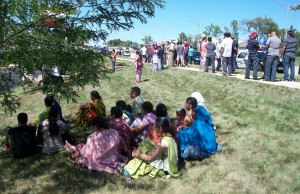 Members of the Sikh community gather outside after the tragic shooting at their Temple. (PHOTO: Michael Clemens)

Several people are shot this morning at the Sikh Temple in Oak Creek, a Milwaukee suburb. Authorities are treating the horrific incident as an act of domestic terrorism.

The first responding officer, a 20-year veteran, was ambushed and shot multiple times. That officer was immediately taken to the hospital for surgery. His condition has not been released, but he is expected to survive, according to Greenfield Police Chief Brad Wentlandt.

Wentlandt says another responding officer returned fire and was able to “bring down” the shooter, who is presumed to be dead.

Wentlandt confirms there are a total of seven deaths — four inside the Temple and three outside, including the shooter.

Froedtert Hospital confirms it is responding to “a mass casualty incident,” saying there are three male patients in critical condition at the hospital.

Multiple agencies are on the scene — local, state, and federal. Law enforcement is uncertain as to whether there might be a second gunman.

Oak Creek Police Chief John Edwards says there are “numerous individual that are deceased,” but “it could have been much worse.” Edwards says the FBI will take over the criminal investigation on this incident.

Edwards says the best information they have so far, is that there was only one gunman. However, he says they are still methodically searching the area, “just to be sure.” Police believe reports of multiple shooters were actually witnesses describing the same shooter as seen from different angles by those at the Temple.

Earlier in the day, Wentlandt pleaded with media not to show helicopter images or give out any other critical information that could hinder their efforts to control the situation.

Wentlandt says the building has been cleared, but law enforcement will likely be working all night. Authorities have released a number for family and friends who need more information. Officials stress that nobody else should tie up the line: 1- 888-298-1964.

Officials have not indicated whether they knew of a motive. They will update the public Monday at 10am.

President Barack Obama: At this difficult time, the people of Oak Creek must know that the American people have them in our thoughts and prayers, and our hearts go out to the families and friends of those who were killed and wounded.

Governor Scott Walker: Our hearts go out to the victims and their families, as we all struggle to comprehend the evil that begets this terrible violence. At the same time, we are filled with gratitude for our first responders, who show bravery and selflessness as they put aside their own safety to protect our neighbors and friends.

Congressman Paul Ryan (R-Janesville): My thoughts and prayers are with the victims, their families, and everyone in Oak Creek who has been impacted by this tragic act of violence. I’m deeply saddened by this malicious crime and remain grateful for the selfless, dedicated service of the emergency response teams and law enforcement officials.

U.S. Senator Herb Kohl (D-Milwaukee): This is a tragic day for our city and for all communities of faith who share grief and concern for the victims of today’s shooting and their loved ones. We also share a deep gratitude to our law enforcement officers. Our prayers are with Milwaukee’s entire Sikh community and we wish them comfort and peace.

Mitt Romney: “Ann and I extend our thoughts and prayers to the victims of today’s shooting in Wisconsin. This was a senseless act of violence and a tragedy that should never befall any house of worship. Our hearts are with the victims, their families, and the entire Oak Creek Sikh community.

Tommy Thompson: “My heart goes out to those in the Sikh Community who had their profession of faith interrupted by a senseless act of violence. Together, as a community of faith, we have an obligation to come together in a show of support during a time of sadness and challenge.

Eric Hovde: Sharon and I send our thoughts and prayers out to all of those involved in the Oak Creek shooting.

Mark Neumann: Our prayers are with the people of Oak Creek

Jeff Fitzgerald: My thoughts and prayers are with the victims and families of the shooting in Oak Creek today.

UPDATE. FBI Milwaukee Special Agent in Charge Teresa Carlson issued this statement: “The FBI is working closely with the Oak Creek Police Department and other local and federal agencies to investigate today’s shooting incident. While the FBI is investigating whether this matter might be an act of domestic terrorism, no motive has been determined at this time. Our thoughts are with those affected and particularly with the officer who was wounded in the line of duty to protect others.”