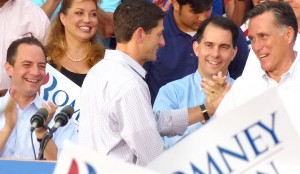 After all the speeches, hand shaking, and photo-ops, national conventions for political parties have historically given presidential candidates a decent bump —  a spike at the polls. “Over the last 40 or so years the average has been about five points in the direction of the party holding the convention.”

Marquette University political scientist Charles Franklin says in the past few years the timing of the conventions has changed. The meetings are now held back-to-back, whereas there had been up to a month between events, leaving plenty of time for the candidates to bask in their bounce.

Now, Franklin says, whatever is gained, is short-lived. “Whatever happens from the Republican convention this week is gonna be a little bit mitigated by the Democratic convention following immediately on the heels of it.”

Traditionally, the incumbent party has the advantage of scheduling their national convention second. There are many factors contributing to a potential bump, including hearing from surrogates — a wife, running mate, other politicians. But, Franklin says, ultimately it’s up to the candidate to sway the voters.

What was the biggest bump ever after a convention? “The all time champion is Bill Clinton at 16 points in 1992.”

The Democratic National Convention gets under way on Tuesday, September 4th in Charlotte, North Carolina.