You are here: Home / Packers / Benson settles on Packers in 2012

The Green Bay Packers added some help at running back, signing veteran 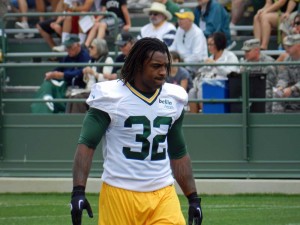 Cedric Benson to a 1-year veteran minimum contract on Monday.

Benson said he had a couple of teams interested in his services for the season, but he picked the Packers.

AUDIO: Cedric Benson on what sets the Packers ahead of other teams :08

With the Packers down to three healthy running backs, Benson would appear to arrive at just the right time.  But just what are the Packers getting?

One thing is for certain, the Packers have no risk  with this deal.  If Benson doesn’t make the regular season roster the Packers wouldn’t owe him anything.

Benson does come with baggage.  A pair of offseason arrests led to his departure from Chicago in 2008 and two more misdemeanor assault arrests in Cincinnati cost him a one-game suspension from the NFL in Week 8 of last season.

Benson comes to the Packers and he says he’s a changed man.

Benson hasn’t missed a game because of injury since Nov. 29, 2009.  He’s durable and that’s something the Packers are looking for.

AUDIO: Benson said he still has fuel left in the tank :16

Benson knows the Packers offense goes through Aaron Rodgers and the passing game.  But Benson is confident there’ll be plenty of opportunities for him.  He said the goal is still to rush for 1,000-plus yards.

Benson has fumbled 12 times over the last two years, but that didn’t scare the Packers off.

Signing veteran players to come in and help this early in the game is not the norm for Packers general manager Ted Thompson.  QB Aaron Rodgers said they like it though.

Benson has to practice two days in shells to stay in line with collective bargaining agreement rules.  Coach Mike McCarthy said Benson wouldn’t play Thursday night against Cleveland which means he’ll be back on the practice field in full pads on Saturday.