You are here: Home / Brewers / Brewers swept by Cardinals

The St. Louis Cardinals capped off a 3-game sweep of the Milwaukee Brewers 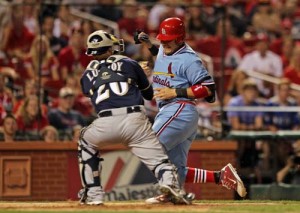 with a 3-0 shutout win at Busch Stadium in St. Louis on Sunday night.

The Brewers managed to score runs in just 2 of the 27 innings in the series.  They also finished just 2 for 22 with runners in scoring position.

The Brewers have dropped 9-straight road games, falling to 18-33 on the road this season.

The Brewers are 17 1/2 games behind the front running Cincinnati Reds in the central division standings.  The Reds are at Miller Park tonight for the first of 3 against the Brewers.