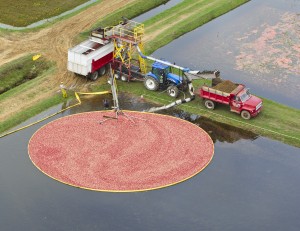 A good year looks to be in the works for cranberry growers. Wisconsin State Cranberry Growers Association President Tom Lochner said the projected increase comes as a bit of a surprise, given the drought conditions which prevailed across much of the state this summer. “We do have a long way to go, and this is just a projection based on surveys of growers,” he noted. Still, that projection – by the National Agricultural Statistics Service – has the crop at 4.5 million barrels. That represents an increase of two percent over the 2011.

Growers have irrigated to make up for the lack of rain. “Water levels are down because of lack of rain, and if we can get some decent rain between now and the start of harvest, I think most growers will be pretty happy,” said Lochner. The cranberry harvest generally begins the last two weeks of September and continues into October. Wisconsin will lead the nation in cranberry production for the 18th straight year.