You are here: Home / News / Emotional homecoming for Ryan 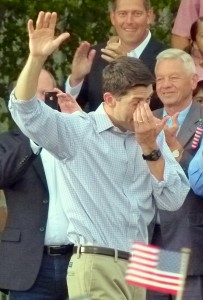 VP candidate Paul Ryan gets a little emotional after a warm welcome from the crowd. (PHOTO: Jackie Johnson)

A teary-eyed homecoming rally for the VP candidate.

The first words from the emotional Vice Presidential Candidate Paul Ryan upon taking the stage in Waukesha were to his mother. “Hi Mom.” Ryan chokes up as he thanks the crowd, “Thank you Wisconsin. It is good to be home.”

The Republican Congressman from Janesville — a fifth generation Wisconsinite — reminisces to the crowd of over 11,000 about growing up in the Badger State, and his time spent hunting, fishing, and snowmobiling; and watching the Packers, Badgers, Bucks, and Brewers. “My veins run with cheese, bratwurst, and a little Spotted Cow, Leinies, and some Miller.”

As for ideas, Ryan says Republicans in the state put forth some good ones, and then acted upon them, and solved problems in the Capital City. Referring to the recall election, Ryan says on June 5 courage was on the ballot and courage won. “We Wisconsinites, we saved Wisconsin that day; and on November 6th, we Wisconsinites will help save America that day.”

It’s a who’s who event at the Waukesha County Expo Center on Sunday. Governor Scott Walker is on hand, along with Lt. Governor Rebecca Kleefisch, Attorney General JB Van Hollen, all members of Wisconsin’s GOP congressional delegation, as well as all four Republican candidates for US Senate, and Republican National Committee Chair Reince Priebus.

Governor Scott Walker shouts, “Isn’t it great to have a cheesehead on the ballot?” 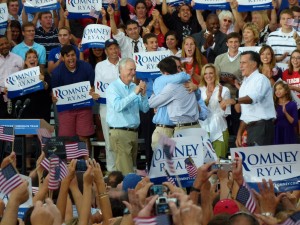 Republican Presidential Candidate Mitt Romney explains why he chose Ryan to be his running mate. He says Ryan has become an intellectual leader. “Leadership comes from character. This is a man who has real character, who loves America, who has passion for America, who understands what it takes to get America on the right track. This leader is gonna help get America strong.”

Romney says Ryan is liked, respected, and admired among his colleagues on both sides of the political aisle in Washington.

No Republican presidential candidate has taken Wisconsin since 1984.

Twice during the event hecklers shouted, but were quickly drowned out by the crowd chanting USA, USA, and quickly removed by security.