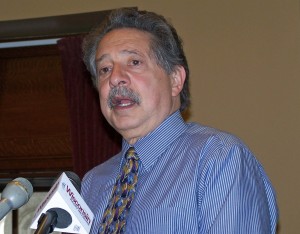 Madison’s mayor is working to make the city safer, but improvements can’t happen overnight. Mayor Paul said the stretch of University Avenue where Badger running back Montee Ball was jumped and beaten Tuesday morning is an area Madison police have had a stepped up presence. “This is an ongoing problem,” Soglin told WIBA. “It is not one that’s going to go away quickly. It’s been building for a number of years. It’s complicated, and we’re going to have to address it from a number of approaches, which includes more than law enforcement.”

Soglin says part of the difficulty is that police can’t know where and when incidents lake the assault on Ball can happen. “Yes, it’s more likely to happen in the 500-600 block of University Avenue and State Street. But if we’re going to get to the root of the problem, we’re going to have to get into these neighborhoods (beyond downtown). And oftentimes that means during the day.”

Soglin noted that there are other tools at the disposal of police besides stepped up patrols. “Security cameras that we put up a year ago on University Avenue were sufficient to help us capture on tape, the shooting that took place in late May,” he said. And, while he has submitted a budget that calls for across the board spending cuts, Soglin said he’s told police chief Noble Wray not to worry about going over budget to address the problems downtown. “Public safety, and these issues in these neighborhoods, is the number one challenge that we face. The part that’s so frustrating, for me, for the city staff, for the public, is that we cannot solve this overnight.”