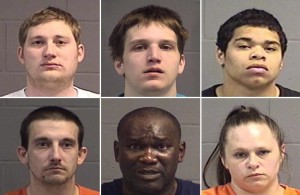 One of six people arrested in May for selling heroin in the Rhinelander area is due to be sentenced.  Rogerick Simmons pled no-contest in July for manufacturing heroin with intent to deliver the narcotic. The 44 year-old Simmons is due in Oneida County Court on Wednesday afternoon.

Dutton has already pled guilty to one of the charges. Jones will be back in court next month. Dietz has a preliminary hearing next week, and Wells has been sentenced on lesser traffic charges.