You are here: Home / Packers / Colts to host Packers without their head coach 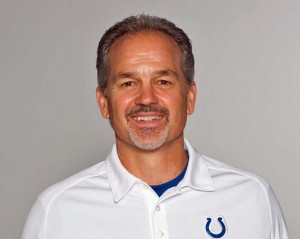 leukemia and is expected to be hospitalized six to eight weeks as he undergoes treatment.

Pagano will be replaced on an interim basis by offensive coordinator Bruce Arians.

The 51-year-old Pagano is in his first season with the Colts (1-2).  He was hired in January after serving as the Baltimore Ravens defensive coordinator.

Team owner Jim Irsay said, “I think it’s unlikely he’ll be all in as the head coach the rest of the season.  He may be able to come back and be in the press box or something.”

Irsay said Pagano’s wife pushed him to see the doctor after noticing unusual bruising on the coach’s body.

The Colts are coming off their bye week and will host the Green Bay Packers this coming Sunday.