You are here: Home / Packers / Neal active, Starks to sit at Indy

The Green Bay Packers released their game day inactive list this morning.  Not 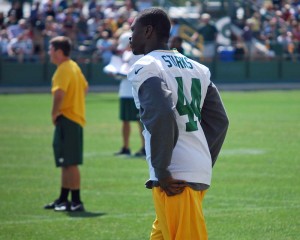 DE Mike Neal, who was activated on Saturday, will get a chance to play today after serving a 4-game suspension to start the season.

RB James Starks has practiced for the last couple of weeks and felt he is ready to go today.  Mike McCarthy said earlier in the week that they wanted to allow Starks to make a good run at being active today, but when it is all said and done, the Packers decided to keep Starks down today.

Greg Jennings is sidelined by a groin injury that he re-aggravated in last week’s game against the Saints.