You are here: Home / News / Obama fires up crowd at UW-Madison (AUDIO) 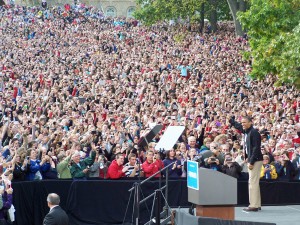 President Obama is greeted by a crowd of 30,000 on the UW-Madison campus. (PHOTO: Andrew Beckett)

A crowd of more than 30,000 people greeted President Barack Obama Thursday afternoon in Madison, as he took the stage on Bascom Hill to make the case for another four years in office.

The appearance was a return to the campaign trail for the president, just a day after his first debate with Republican challenger Mitt Romney. Many critics have argued the first meeting of the two candidates was a weak showing by Obama and a decisive win for the GOP nominee.

Obama described the candidate he met on stage Wednesday night as a “very spirited fellow who claimed to be Mitt Romney,” but was actually not the “real Mitt Romney.” The president says the “real Mitt Romney” has been running around the country promising $5 trillion in tax cuts that favor the wealthy, but claimed not to know anything about that during the debate. Obama says Romney’s plan would either blow up the deficit or add debt to the middle class, and urged voters to support his plans to create jobs and prosperity for the nation by growing the middle class.

In a speech that went on for about 23 minutes, President Obama made frequent comparisons to the plans being offered by him and his opponent. He argued that Romney’s ideas offer a return to the same policies that set up the nation for a fiscal disaster, while Obama says he hopes to continue the progress he’s made in the last four years to create jobs and grow the economy.

Obama urged those in attendance to make sure they are registered to vote and to get out on Election Day. He asked the crowd to “keep believing in me” and to help him win Wisconsin and the presidency again in November.