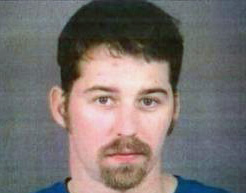 An armed man is on the run after attempting to sexually assault a Wisconsin Rapids woman at gunpoint Wednesday night. The victim’s daughter called 911 just after nine to get help, saying 31 year-old suspect Matthew Lee Fosnot was threatening her mother with a gun at their 18th Avenue home.

Police Chief Kurt Heuer said his department’s Special Response Team secured the house, but Fosnot was no longer there. He is believed to be armed and driving a 1987 grey Toyota pickup with several ham radio antennas. Fosnot may be in the Wisconsin Rapids area, or he may be in the Portage area. Anyone with information about Matthew Lee Fosnot is encouraged to contact law enforcement immediately and not to attempt contact with him. Fosnot is described as a white male with brown hair, 6’1″, 210 pounds.