You are here: Home / Sports / Shining Moments: A Look Back at Toon’s Toss 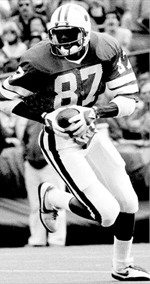 Wide receiver Al Toon had many great moments with the Badgers, but he may be best known for a play in the October 23, 1982 game against Illinois.  Quarterback Randy Wright threw the ball backwards to Toon. The pass fell short and bounced. Toon picked it up and made a forty yard touchdown pass to tight end Jeff Nault. The “bounce pass” completion became one of the greatest moments in Camp Randall history. Wisconsin went on to lose the game on a field goal, but because the play was so memorable, many fans forget that the Badgers lost.

WRN Sports Director Bill Scott spoke to Al Toon about the famed play. Toon recalls Badger head coach Dave McClain had some experience with the play and knew it had proven successful for some high school teams. “Kudos to the coaches for trying something a little off the map and allowing us to go out there and try it and…it’s been sticking in the memory of Badger fans forever,” said Toon.