You are here: Home / Business / Voter fraud billboards up in Milwaukee 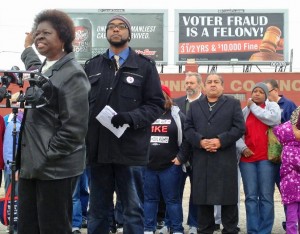 There’s concern over what are being seen as voter intimidation billboards in minority neighborhoods in Milwaukee. At least twenty billboards have been placed throughout the metro-Milwaukee – mostly in Black and Latino neighborhoods – and a coalition asked Monday that the billboards come down. “We had a meeting Tuesday afternoon as a coalition, in regards to the billboards,” said Mike Wilder is with Citizen Action of Wisconsin. Wilder says the billboards – featuring a judge’s gavel, reading “voter fraud is a crime” as well as warning of “up 3 1/2 years and a $10,000 fine” – are “a voter intimidation tactic.” The billboard space was sold by outdoor advertising giant Clear Channel, and the same billboards have also been placed in Florida and Ohio.

“The billboards say they’re paid for by a private family foundation,” said Wilder. “Clear Channel doesn’t have to say who that is.” A Clear Channel vice-president said last week that the company usually requires that ads have the name of the purchaser at the bottom – and that it was a mistake that these billboards don’t. The billboards apparently won’t be coming down.