You are here: Home / Packers / Benson may need surgery 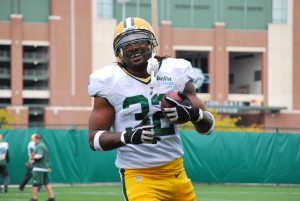 injured reserve.  Under the rules of the newly created injured list, Benson could have returned to practice this week and been eligible to return to action in two weeks.

But Benson’s Lisfranc injury to his left foot hasn’t totally healed yet.  He plans to visit a foot specialist in North Carolina to take another look.

Dr. Robert Anderson of Charlotte, North Carolina is the specialist that the Packers trust, according to Benson.  If Benson would need surgery, that would officially end his season.

Shields has already been ruled out of Sunday’s game at New York against the Giants.  He hasn’t played in a game since Oct. 14 against Houston.

Shields said he’s recovering from a high ankle sprain and never was on target to play against the Giants anyway.

It would appear that outside linebacker Clay Matthews will miss Sunday night’s game as well.  Matthews suffered a pulled left hamstring on the Arizona game on November 4th.