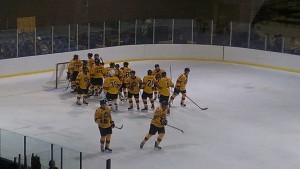 The Gamblers celebrate their 5-0 win over the Youngstown Phantoms

In what was advertised as a “throwback night” for Green Bay Gambler fans at the Brown County Arena, the Gamblers recaptured it’s form from years past by shutting out the Youngstown Phantoms 5-0.

It only took four minutes after the start of the second period for the Gamblers to strike again.  Trevor Olsen scored his second goal of the game on a power play to increase the Gambler lead to 3-0.

Forward Kevin Irwin scored the fourth goal for the Gamblers at the 7:14 mark of the second period.

The third period saw one power play goal at the 8:11 mark by Gambler forward Ryan Siroky to seal the game at 5-0.

Gambler goalkeeper Michael Rotolo made 27 saves in the game to record  his, and the team’s, second consecutive victory.

The Gamblers (3-7-2) look to capture another win and move past Youngstown (5-8-0) in the league standings as they wrap up this two-game series against the Phantoms Saturday night.