You are here: Home / News / Romney tries to seal the deal 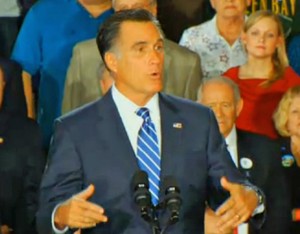 West Allis was the site of a final campaign stop for Mitt Romney Friday in battleground Wisconsin. With the campaign in the home stretch, Romney spoke to an appreciative and supportive crowd at State Fair Park, and promised that he, not Barack Obama, will be the real candidate of change. “The same course we have been on will not lead to a better destination,” Romney told the crowd. “You know this.”

Romney, who Democrats have criticized for lack of detail on fiscal policy (his plans are not just “sketchy, they’re etch-a-sketchy,” said Vice-President Joe Biden in Beloit on Friday), promised he’ll send congress several “fundamental reforms” including a “down payment on fiscal sanity act.” He said that would immediately cut non-defense discretionary spending by five percent. “By the way, I’m not just going to take office on January 1st, I’m going to take responsibility for that office as well,” he added, to cheers from the crowd. Romney also said he’ll issue executive orders for state waivers to repeal Obamacare, and a review of all Obama-era regulations which could curtail business growth.

Romney took the stage following warm-up remarks from Wisconsin Senator Ron Johnson, Governor Scott Walker, Republican National Committee Chairman Reince Priebus, and former Green Bay Packer Bart Starr. Johnson hammered on the President’s record. “You know what the missing ingredient is? Leadership. President Obama doesn’t have a very good record of leadership. You know, he came into office, he totally controlled government. A fillibuster-proof majority in the Senate. He met with Republicans, basically told then to take a hike. He said ‘we won.'”

“You know that if the president is reelected, he’ll still be unable to work with the people in Congress,” said Romney, who cited his experience working with Democrats in the Massachusetts legislature during his tenure as governor there. “He’s ignored them, he’s attacked them, he’s blamed them.” 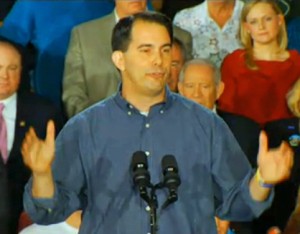 “I feel good about this, because today’s my 45th birthday, I’m the 45th governor of Wisconsin, and with your help we’re going to elect Mitt Romney the 45th president of the United States,” Walker told the cheering crowd, after urging then to get out the vote and volunteer for the campaign in the final days.

Romney said Obama has failed to live up to campaign promises over the past four years. “Words are cheap. A record is real, and it’s earned with real effort,” he said. “Real change is not measured in words. Real change is measured in achievements.”

Starr, the former Packer quarterback, gave Romney his endorsement, and read the crowd some quotes from Vince Lombardi, the legendary coach who led Starr and his teammates. “He’s talking about a Mitt Romney,” said Starr. Ironically, Lombardi was a lifelong Democrat.