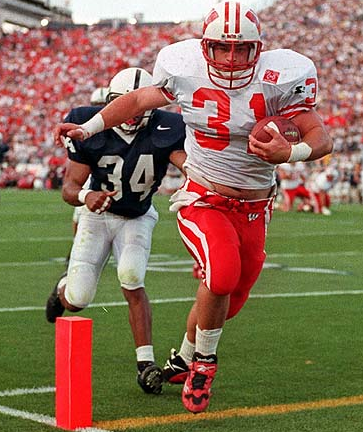 September 30, 1995, Wisconsin met Penn State at Happy Valley for the first time since the Nittany Lions joined the Big Ten. The unranked Badgers and Coach Barry Alvarez came into the game as underdogs with 6th ranked Penn State riding a 20 game winning streak. It was Coach Joe Paterno’s 500th career game.  The Badgers were led by quarterback Darrell Bevell.  Bevell threw a 21-yard touchdown pass to tight end Matt Nyquist to put the Badgers up 10-0 at the end of the first quarter.  Then again in the fourth quarter, Bevell threw another 21-yard touchdown pass. This time to wide receiver Tony Simmons. In all, Bevell completed 18 of his 22 pass attempts for 192 yards and 2 touchdowns.  Wisconsin defeated Penn State 17 to 9 to break their 12 game Big Ten winning streak.

Nyquist finished the day with four catches for forty yards.  WRN Sports Director Bill Scott spoke with Nyquist about what the game meant for the Badgers.  “It was a huge game for us. A lot of fans and a lot of tradition. We felt like we had something to prove… We just had a feeling that it was one that we could win if we played right,” said Nyquist.

The Badgers finished that season with an unremarkable record of 4-5-2, but the win over Penn State proved to be a highlight. After the game, Alvarez said, “It was a huge football game for us. Coming into a tough environment, the kids responded and played their hearts out.”