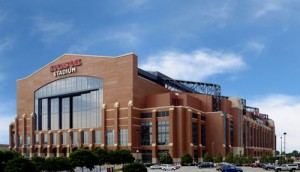 The Badgers will attempt to earn their 14th Big Ten championship on Saturday at Lucas Oil Stadium in Indianapolis, facing the Nebraska Cornhuskers. Wisconsin and Nebraska will meet for the second time this season after going head to head in the Big Ten opening game on Sept. 29. In that match-up, Nebraska came from behind after being down 17-points in the third-quarter to tie the score at 27 just into the fourth quarter. A field goal would win it for the Cornhuskers with a 30-27 victory.

WRN Sports Director Bill Scott spoke with head coach Bret Bielema. He says the Badgers biggest challenge will  be Cornhusker quarterback Taylor Martinez, saying, “If he’s got an open hole he can outrun any DB we’ve got, any linebacker. So that’s a tremendous challenge for us.”

Wisconsin returns to the Big Ten Football Championship Game after earning a 42-39 victory over Michigan State in the inaugural contest to claim a second straight conference title and trip to the Rose Bowl Game. The Badgers are looking for a third straight crown for the first time in school history. Nebraska has won 43 conference titles but is looking for its first Big Ten Championship. Saturday’s winner will also advance to the Rose Bowl.