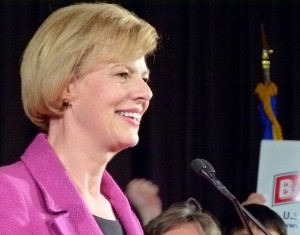 Democrat Congresswoman Tammy Baldwin defeats former Republican Governor Tommy Thompson for the US Senate seat being vacated by longtime Senator Herb Kohl. In her acceptance speech, Baldwin calls it a huge victory for Wisconsin’s middle class. “It’s that battle for Wisconsin’s middle class that has been what this has all been about since this journey began 14 months ago.”

Thompson has had a long political career in Wisconsin, beginning in the 1960s in the state legislature. Baldwin won seven terms in Congress serving the Madison area, and makes history in her victory over Thompson. 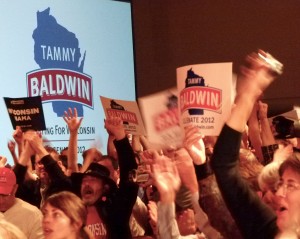 Wisconsin’s US Senate race was the most expense race in the nation, and the most negative. Political Science Professor Charles Franklin conducts the Marquette University Law School Polls. He verified in the last survey that the negative perception of the campaign is real. “Everybody thinks that they live in the most negative campaign ever, probably in the history of the universe. This is a case where the data back that up.”

That poll showed Baldwin ahead of Thompson, 47 percent to 43 percent, with 10 percent undecided.