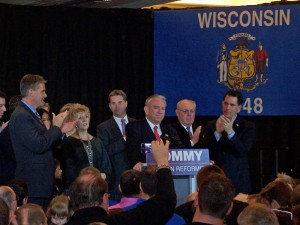 After suffering a tough loss to Democrat Tammy Baldwin Tuesday in the US Senate race, Republican Tommy Thompson offered up an often emotional and reflective concession speech to supporters gathered in Pewaukee. Thompson said “we fought the good fight. We came up short. But that doesn’t mean we shouldn’t keep fighting.”

Thompson said he entered the race because he loves Wisconsin and wanted to spend his last years serving the people of the state again. He devoted a large portion of his speech to thanking the many people who have supported him during the campaign and over the years, drawing shouts “no” from the crowd when he claimed he let those people down by not winning.

Thompson has had a long political career in Wisconsin, starting in the Legislature in the 1960s and up through his time as governor from 1987 to 2001, before leaving to serve as secretary of the US Department of Health and Human Services under President George W. Bush.

While he says this campaign marks the end of his time in public office, Thompson promised not to fade away and vowed to support people “to do the right things, for the right reasons, to build Wisconsin and build America.”