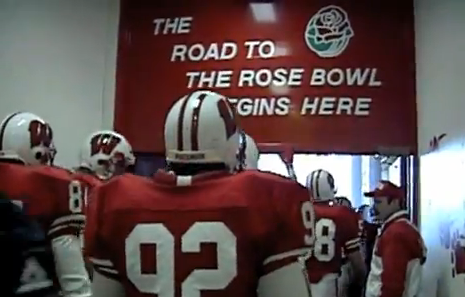 In 1993, the Big Ten title ended in a tie between Wisconsin and Ohio State.  Rose Bowl selection went to the team that hadn’t been in the longest period of time. For the Badgers, that was 31 years.  They would meet the UCLA Bruins.  The Rose Bowl Stadium was packed with 101,237 fans, the majority wearing Wisconsin red, despite being on the Bruins home turf.  Led by quarterback Darrell Bevell, the Badger offense churned out 250 yards rushing. The defense forced 6 turnovers, including 5 fumbles. Badger running back Brent Moss was named player of the game with 158 yards on 36 carries and 2 Touchdowns.  Bevell scored the game winning Touchdown on a 23 yard run.

WRN Sports Director Bill Scott spoke with head coach Barry Alvarez about his first trip to the Rose Bowl with Wisconsin in 1994.  He said, “We had a vision and a plan. People worked very hard. We started at the bottom of the mountain…I think we outworked a lot of people.”

Alvarez would lead the Badgers to two more Rose Bowl victories, in 1999 and 2000.  After returning as head coach on the news of Bret Bielima’s departure, Alvarez will attempt to remain undefeated in his fourth Rose Bowl appearance. This time around, the Badgers will play Stanford on New Year’s Day.