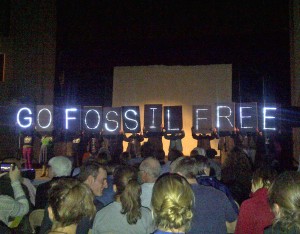 Environmental activists want the University of Wisconsin to divest itself of holdings in coal and oil companies. Environmental writer and climate change activist Bill McKibben believes fossil fuel companies have become “rogue agents.” He’s the driving force behind a nationwide divestment effort. “They’re not outlaws against the laws of the nation, because they get to write most of those, but they are outlaws against the laws of physics,” said McKibben, who brought his Do the Math Tour to Madison last week. “If they carry out their business plan, the planet tanks.”

McKibben has estimated that the earth could burn another 565 gigatons of carbon dioxide and stay below 2°C of warming, which is the climate target agreed upon by every nation except North Korea at the 2009 Copenhagen Climate Change Conference. But fossil fuel corporations already have 2,795 gigatons in their reported reserves – or five times the safe amount. “The end of this story is already written, unless we intervene,” he said. “It’s going to get burned . . . unless we alter this path in a fundamental way.”

The Madison chapter of 350.org will petition the Board of Directors of the UW-Madison Foundation to sell all stock in companies that extract, transport, process or distribute fossil fuels. The petition will be delivered to the UW-Madison Foundation offices on Monday morning. “We’re asking for people who say that they share our sense of the world, that climate change is a deep problem, to stop profiting from it,” McKibben said.

McKibben said divestment, based on the model which helped end apartheid in South Africa, is essential in the effort to reduce emissions and hold the line on climate change. “We’re going to need to ask, or demand, that institutions like colleges and churches sell their stock in fossil fuel companies. The logic here couldn’t be more simple: if it’s wrong to wreck the climate, than it’s wrong to profit from that wreckage.”

The UW Foundation is an independent, not-for-profit, tax exempt organization which raises, receives and invests gift funds for the University of Wisconsin-Madison. An elected board of directors oversees its assets and activities. Our commitment to donors is to invest gift funds with the goal of enabling their resources to do the most good for the University of Wisconsin. We will continue to invest in a manner that we believe best honors that commitment.