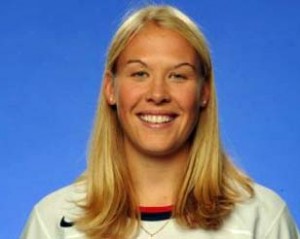 The 29-year-old former Wisconsin Badgers star was selected the top defenseman in the 2010 Vancouver Olympics, leading the United States to a second-place finish.

Engstrom also played in the 2006 Turin Games, helping the U.S. to a bronze medal and helped the Americans win four world titles.

The Siren, Wisconsin native had 9 goals and 44 assists in 112 international games.