You are here: Home / Packers / Is the Packers’ defense ready for 49ers

The Green Bay Packers put together a solid defensive effort on Saturday night, 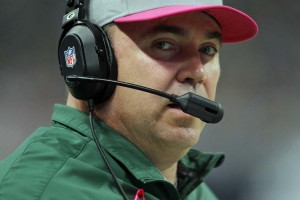 holding Adrian Peterson to 99 yards rushing in a 24-10 Wildcard playoff victory over the Minnesota Vikings.

But the Packers are going to get a much better indication of where their defense is when they meet the San Francisco 49ers this Saturday night in San Francisco.

When Christian Ponder was declared out of last Saturday’s game with an elbow injury, the Vikings had to go with backup Joe Webb.

The Packers stopping Adrian Peterson just got much easier when Webb stepped on the field.  Webb was so bad that the Packers only needed to concentrate on one player.  With no threat of a big play down field, the Packers stacked the line of scrimmage and held Peterson in check.

The 49ers won the first meeting this season against the Packers, 30-22 at Lambeau Field in week 1.  But the two teams are much different at this stage of the season.

AUDIO: Mike McCarthy says everybody is different at this time of year :19

If the Packers are going to turn the tables on the 49ers in San Francisco, they’re going to have to be more physical.  They were pushed around quite a bit in the opener and lost the battle in the trenches.

The Packers won’t be able to load the box on the 49ers like they did against the Vikings.  So they’ll have to play it more straight up and hope they can matchup physically with the 49ers.