You are here: Home / Badgers / Anderson excited about his first recruiting class (AUDIO) 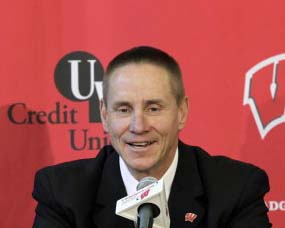 Among the group of new players is 6’6, 215 lb junior college quarterback Tanner McEvoy, adding to Wisconsin’s total of 5 current scholarship quarterbacks going into next season.

AUDIO: Anderson said he wanted to add a QB to boost overall competition :13

McEvoy brings a strong running element to the position.  He left South Carolina and spent a year at Arizona Western College and has three years of eligibility remaining.  McEvoy might have what Anderson is looking for at the position offensively, but he won’t be handed the starting job.

Anderson said he won’t make junior college players a priority in the future, but he thinks going that route from time to time isn’t such a bad idea.

The 17 scholarship class includes 8 players from Wisconsin.  That list follows: