You are here: Home / Legislature / Bi-partisan thanks to those in uniform 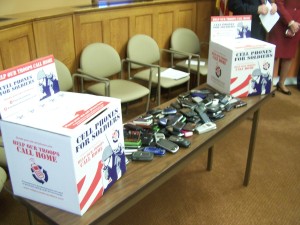 State lawmakers from both parties gather for a Love a Vet event. AT&T is taping video segments today for those at the Capitol who want to send a message to deployed troops.

“Knowing that people care is the biggest gift that we can give to those serving across the world,” said John Scocos, Wisconsin’s veterans secretary, who relates to his experience being deployed.

“Our country owes a tremendous bit of gratitude to our soldiers that have served overseas but also in this country,” says Senate Democrat Mark Miller, a former fighter pilot.

Assembly Majority Leader Scott Suder, who has been deployed multiple times to the Middle East, says a message from back home is “incredibly important.”

AT&T is also encouraging people to donate used cell phones at its retail outlets. The money from recycling the phones will be used to buy phone cards for troops to contact family and friends back home. People can also print off a free shipping label to donate their old phone at cellphoneforsoldiers.com.