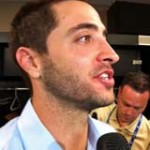 Training until Friday and he’s already sent notice to the team’s media relations department that he will not field questions pertaining to Yahoo Sports’ report linking him to a Miami Clinic that is alleged to have sold PED’s to several baseball players.

Braun said his lawyers had contacted the clinic while doing research to aid in his successful appeal of a 2011 positive test.