You are here: Home / Badgers / NFL Combine is underway 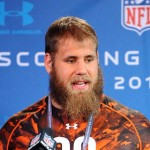 Green Bay Packers.  But after the release of veteran Jeff Saturday, don’t be surprised if the Packers select a center somewhere in the upcoming draft.

Would the Packers consider taking a center early on?  And how about Wisconsin’s Travis Frederick?

Frederick can play guard as well, which adds to his value.  He started at left guard for the Wisconsin Badgers in 2011 and is projected as a late 1st round or early second round selection in April.

The Packers currently own the 26th pick in the upcoming April draft.