You are here: Home / Sports / Shining Moments: National Champ on and Off the Ice 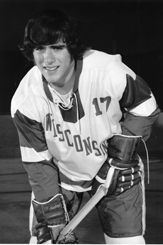 Few have been able to say they’ve been a part of a national hockey championship both as a player and as a coach. Mike Eaves is one of those people. Eaves is considered the man responsible for getting the 1977 Badgers through the NCAA semifinals and into the title game. It was March 25, 1977 against the New Hampshire Wildcats in Detroit, Michigan. After 10 minutes of no scoring in the first period, New Hampshire opened the scoring with two goals in five minutes, followed by Wisconsin’s Dave Herbst scoring less than a minute later, and New Hampshire hitting a goal again less than a minute after that. Before the break Mike Meeker scored for Wisconsin, making the score 3-2. After a scoreless second period, Badger Les Grauer scored the tying goal 11:42 into the period. The battle would continue into overtime. Just 42 seconds in, Eaves scored to send the Badgers to the title game.  They played Michigan the next day and won, 6-5, in overtime, giving the Badgers their second NCAA title. Wisconsin coach Bob Johnson was named Coach of the Year. 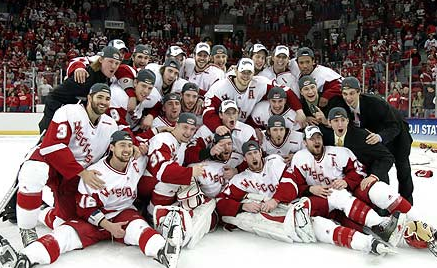 Eaves second NCAA title win came in 2006. In his fourth season as the Badgers’ head coach Eaves led the team to a 30-10-3 season and a 2-1 victory over Boston College to become NCAA champions.

WRN Sports Director Bill Scott spoke with Eaves about both of his wins. “As a player you have to get yourself ready to play, and there’s all this energy, physical, mental, emotional. And then as a coach, you have to be in control and there’s more of a sense of satisfaction when you win a championship as a coach,” said Eaves.

Eaves has played more games for Wisconsin than any other player in history. He is second all-time in career points and fourth all-time in goals scored. As head coach he has lead the team to two national title game appearances, winning one of them.