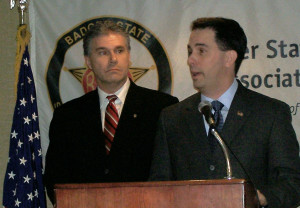 Van Hollen recalls when he became aware of a huge problem with crimes against children being conducted over the Internet. “I was astonished to hear numbers that I hadn’t heard before when I first became attorney general, pointing out how many children in Wisconsin alone are being preyed upon over the Internet by pedophiles, and that there was something we could do about it if we’re willing to focus, put more resources into it and work with local law enforcement to help solve the problem.”

One of the big changes proposed involves collecting DNA samples from suspects upon arrest instead of just upon conviction. Van Hollen says $6 million of the new budget will help collect and process about 68,000 DNA samples every year.

The Walker budget includes $1 million to add five full time staff members to the Internet Crimes Against Children Task Force, $3 million to expand GPS tracking for people on restraining orders, and $4 million for the Sexual Assault Victims Services to replace dollars that used to be collected from surcharges.

Governor Walker is also planning to move the Office of Justice Assistance from under the Governor’s leadership to the Department of Justice under the Attorney General.