You are here: Home / News / Finding harmony on Supreme Court 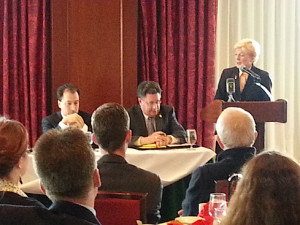 Justice Patience Roggensack hopes to meet with fellow Wisconsin Supreme Court Justices to clear the air surrounding the nearly two-year old altercation between two other Justices on the Wisconsin Supreme Court, and to “fix the damage that’s been done to the institution.” She says, “It’s a very significant problem, but it’s critical that the court get it right as an institution for the court itself as an institution. We have to repair the damage. So, I’m willing to listen to any suggestion that any of my colleagues have.”

So far, all seven justices together hadn’t talked about the June 2011 physical confrontation between Justices Ann Walsh Bradley and David Prosser, but Roggensack assures the public that it will be resolved if she’s reelected. “Because I’ve told them that we will work on it until it’s resolved. I’ve given them my word. I don’t give my word lightly.”

Prosser faces ethics charges from the state Judicial Commission, but Roggensack and other Justices have recused themselves from the case. Roggensack’s opponent vying to take the seat on the High Court, Marquette Law School Professor Ed Fallone, describes the court as “dysfunctional” and says its work is hampered by the long-unresolved matter.

“Well this is obviously a serious matter and it was treated seriously by the Judicial Commission and certainly the members of the public that I talk to — to this date — are still concerned about the fact that there is no resolution and no accountability for that matter. So regardless of the other duties of the court, it needs to devote sufficient time and attention to resolving this.”

The two candidates spoke to reporters Tuesday after a debate at the Madison Club. The winner of next week’s election will serve a 10-year term on the state Supreme Court.