You are here: Home / Badgers / It’s that time. Get your brackets ready! (Video)

The field for the NCAA‘s 68-team men’s basketball tournament is set.  The selection 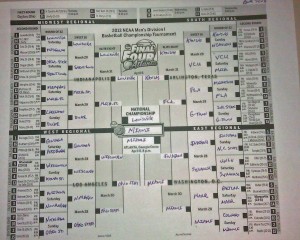 committee anointed fourth-ranked Louisville as the No. 1 overall seed.  The Big East champions are in the Midwest Region and will play the winner of the North Carolina A&T and Liberty game.

Top-ranked Gonzaga owns the No. 1 seed in the West.  The West Coast Conference title winners will face Southern in their tournament opener.

Third-ranked Indiana get the No. 1 seed in the East and will take on the winner of the first round game between LIU Brooklyn and James Madison.

Seventh-ranked Kansas is the No. 1 seed in the South.  The Big 12 champs will open against Western Kentucky.

The Big East led all conferences with eight teams selected.  The Big Ten is next with seven.

Check out my thoughts on the Big Ten & the Badgers in the attached Google Hangout with Missourinet Sports Director Bill Pollock.