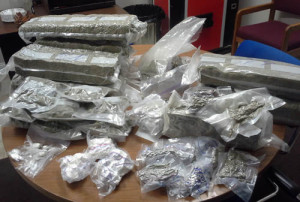 Drugs seized as part of an investigation in Oshkosh (PHOTO: Mike Kemmeter)

A four-month long heroin investigation in Oshkosh has ended with the largest drug bust in the city’s history. Police says three suspects are in custody, after officers seized heroin, cocaine, marijuana, and a number of other drugs earlier this month.

Oshkosh Police Chief Scott Greuel says the street value of the drugs is estimated at nearly $128,000, making it the city’s largest single day seizure of illegal drugs and narcotics.

Police say 36-year-old Ubaldo Adame, 43-year-old Fernando Sandoval, and 45-year-old Rodolfo Reyes-Olivas are in custody and each face numerous drug-related charges. All three are currently being held in the Winnebago County Jail after being arrested almost two weeks ago. Officials say they waited to announce the historic bust because their investigation was still on-going.