You are here: Home / Legislature / Schultz has primary challenge 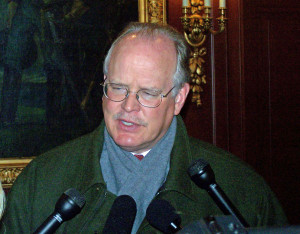 A primary challenge is in the works for a moderate Republican in the Wisconsin state Senate. Senator Dale Schultz of Richland Center is a veteran lawmaker who’s broken ranks on two high-profile issues. But he still votes with the party almost 99 percent of the time. “In most circumstances that would be enough to prevent you from facing a primary challenge,” Schultz told WGLR. “But apparently there’s a level of intolerance for an independent voice. That’s new.”

Schultz rankled his party by voting against Act 10, and against the GOP’s mining incentive legislation two years in a row. His crucial vote in the last session meant the controversial measure lacked enough votes for Senate passage.

Schultz said he won’t decide until this fall whether he’ll run again, but if he does, he’ll face a primary challenge from GOP state Representative Howard Marklein, who cited the Act 10 and mining votes as areas of concern. “I guess I want to emphasize my skill set, my abilities,” said Marklein.

Marklein, a CPA, is in his second two-year term in the Assembly. Schultz has served 30 years in the legislature and has been in the Senate since 1991. In addition to his high-profile opposition to important Republican initiatives, he has also formed an alliance with veteran Senate Democrat Tim Cullen of Janesville, calling for an end to divisiveness and polarization.