You are here: Home / Agriculture / Urging feds to buy cranberries 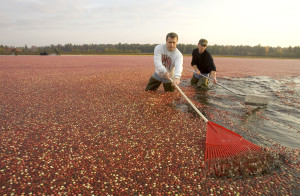 Congressional leaders on both sides of the political aisle from Wisconsin want the U.S. Department of Agriculture to buy cranberries for school lunches and other nutrition programs. Wisconsin cranberry growers would also benefit from the large purchase.

Democratic Senator Tammy Baldwin cites unfavorable market conditions following a record crop. “Despite the climate conditions that they were battling with — the warmest summer on record, and early spring, etc — they had still an abundant crop. But there’s also a significant regional over-supply that made prices drop and they’re really struggling now.”

Baldwin joins fellow lawmakers and cranberry growers across the country in asking USDA to consider a purchase of 50 million pounds of cranberries. The federal agency wants to potentially limit dried cranberries — or  craisins — from the school lunch program, saying there is too much added sugar. “We think that’s wrong-headed, and inadvisable, and have weighed-in to make the case for the cranberries growers for why this is a win-win situation for our children and our cranberry growers.”

Cranberries contain significant amounts of antioxidants that might help prevent against heart disease, cancer, urinary tract infections, and other diseases. Baldwin says it’s important to weigh the overall nutrient value of the tart fruit, as compared to fruits that are higher in sugar despite none being added. “If you compare craisins to raisins, you actually have lower sugar and a very nutrient-rich product.”

The cranberry industry argues the added sugar is necessary for the tart berries to be palatable. Wisconsin produces more cranberries than any other state in the nation and produces more than half of the entire world’s supply.