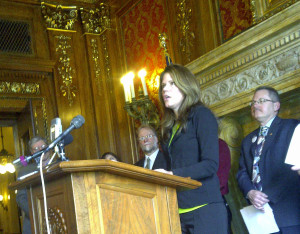 Governor Scott Walker signed a set of “emergency rules” governing the conduct of protesters in the state Capitol in Madison, on the same day a Democratic lawmaker called for “reasonable dialogue around the exercise of First Amendment rights” in the building.

“It is not anticipated that the rule changes will have any new impact upon any person or group that follow the permit process,” said Stephanie Marquis, a spokeswoman for the state Department of Administration, in a statement released Thursday. “To be clear, there are not any new enforcement measures.”

Earlier Thursday, state Representative Chris Taylor characterized the rules as the latest chapter in a continuing “crackdown” on free speech at the Capitol. “I do think the buck does stop with the governor,” the Madison Democrat said during a press conference at the Capitol. “I do think that the governor, if he’s not engaged at this point, needs to be engaged. And the attorney general.”

“If you look at the administrative regulations that are in place right now, they could have been written in Russia. They could have been written in any other totalitarian state,” said former Kenosha County District Attorney Bob Jambois, a self-described “conservative guy” who’s represented many people who have received citations from Capitol Police. Jambois said the regulations were “written with other disregard for the constitutional rights of citizens to come into this building and give voice to their views.”