You are here: Home / News / Budget committee could vote on WEDC 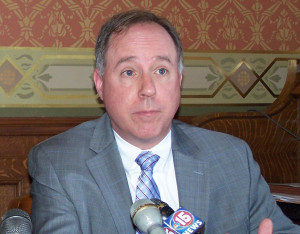 The leader of the state Assembly stood by the state’s troubled economic development agency on Tuesday, and said the legislature’s budget panel should vote as scheduled this week, on the biennial appropriation for Wisconsin Economic Development Corporation. The agency was the subject of a highly critical state audit.

“I know that there are serious problems that exist, there’s no doubt about that, but many of them, I think are in the process of being solved, or are well over a year old under different leadership, where they’ve already replaced the director,” said Assembly Speaker Robin Vos. Vos said the legislature’s Joint Committee on Finance should vote Thursday on more than $76 million in funding for WEDC. The legislature’s Joint Audit Committee will also be meeting Thursday, specifically to consider the WEDC audit.

On Monday, the agency’s public information officer resigned after Madison television station WKOW reported that he owed thousands in back taxes, and is the subject of legal action regarding alleged improper unemployment benefits. John Gillespie had held the position for only one month.

“That’s an embarrassing situation, no doubt about it,” said Vos. “WEDC’s under the spotlight right now, and they’ve got to realize that they sit in a different position than the Department of Corrections, or the department of X,Y and Z.”

While stating that the Joint Finance Committee action on WEDC could take place as scheduled this week, Vos said the funding can be revisited, if necessary, prior to final action on the state budget. And he said the situation at WEDC was “totally different” than that at the University of Wisconsin System, where the presence of a budget surplus angered Vos and other GOP lawmakers.

“They didn’t tell us the situation was there, didn’t even realize that it existed, and then attempted to not just address the concerns, but really say that everything was just fine,” said Vos.

GOP anger over the UW reserve was similar to the anger Democrats have shown, regarding the problems at WEDC. “This is a broken situation. You cannot entrust this organization, as it’s currently constituted, to be able to correct itself,” said Assembly Minority Leader Peter Barca, who serves as a WEDC board member. On the Assembly floor Tuesday, Democrats tried and failed to advance a motion calling for a special commission on the agency.

“The statutes are not helpful hints. That seems to be what WEDC thinks they are. They are the law,” said Barca.