You are here: Home / News / ‘Click It or Ticket’ campaign begins 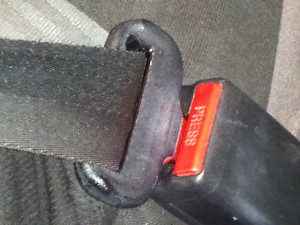 Beefing up efforts to crack down on seatbelt noncompliance.

State Patrol Major Sandra Huxtable says cops are looking for unbuckled drivers and passengers. She says their goal is not specifically to write tickets, it’s about saving lives. “I can tell you that last year in Wisconsin we had 601 fatalities — that’s the unofficial number — and about 50 percent of them were unbuckled. I know that many, many of those lives — of those 50 percent — could have been saved had they been wearing their seat belt.”

Huxtable says over 100,000 tickets were issued last year for violating the buckle-up law.

The cost for violators is $10, with no demerit points or penalty assessment. Surveys show that one of every five Wisconsin motorists do not wear seat belts — more than the national and Midwest averages. Wisconsin has had a seat belt law since 1971; primary enforcement went into effect June 30, 2009.

The annual “Click It or Ticket” safety campaign starts Monday and goes through June 2nd.