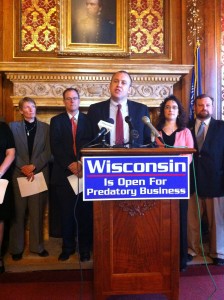 As the legislature’s Joint Finance Committee is set to take up a proposal today that would exempt rent-to-own companies from the state’s Consumer Act, a coalition of Democrats and activists gather to urge its removal from Governor Walker’s budget proposal. Rep. Gordon Hintz (D-Oshkosh) said, under the budget provision, rent-to-owns would no longer have to disclose their APRs or comply with a number of current transparency requirements.

“The rent-to-own industry largely preys on low-income consumers,” added Rep. Jon Richards (D-Milwaukee). “The proposal in the budget makes it easier for these corporations to trap people in a spiral of debt.” Richards is among JFC members who have promised to vote to remove the policy item from the budget.

Another finance committee member, Rep. Cory Mason (D-Racine), talked about rent-to-own changes being slipped into previous budgets under Governors Doyle and McCallum. Mason cited the “bi-partisan consensus” in removing it from past budgets. He said there is bi-partisan support this time around but the real test will be JFC’s vote later today.

The industry maintains that it provides a valuable service to consumers who have a hard time obtaining credit or who want to be able to opt out of making a purchase by using a lease.