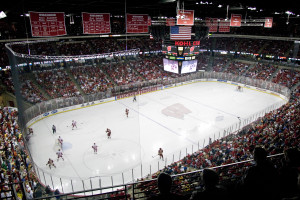 Wisconsin hockey at the Kohl Center

The majority of conference games will be played on Friday and Saturday nights, but the schedule will also feature a limited number of games on Thursday, Sunday and Monday.

The Badgers will then play home series against Penn State, Michigan and Ohio State before hitting the road again at Michigan on New Years Eve.