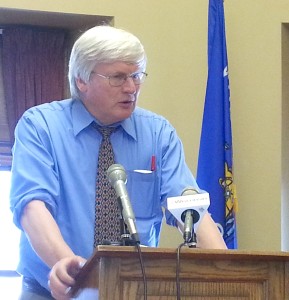 It could soon be more difficult to avoid paying your taxes.

The state Legislature’s Joint Finance Committee votes unanimously to add 15 new people to the Wisconsin Department of Revenue specifically to track down those who are delinquent in their state taxes.

Republican Senator Glenn Grothman (R-West Bend) reluctantly casts a vote in favor of the state budget provision. “I’d like to comment on this. I’m gonna vote yes on this because they have me over a barrel, but I hope we haven’t seen the last of this.”

Grothman says most people believe that DOR tax collectors are more difficult than those at the IRS. “My personal opinion is sometimes these guys are unnecessarily mean and heartless.”

Finance Committee Cochair Republican Alberta Darling (R-River Hills) says tax collectors have a job to do; she says honest and responsible taxpayers support efforts to collect money from tax scofflaws. The Legislative Fiscal Bureau estimates the additional staff would collect nearly $19 million in additional revenue during the next two years. About $1 billion in delinquent taxes are owed to the state.