You are here: Home / Fires/Accidents/Disasters / Media get closeup look at fire 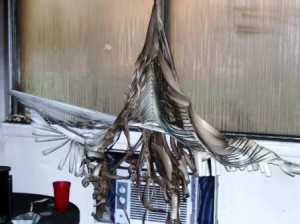 A Wisconsin fire department has opened up to the media with an unprecedented view of the results of an apartment fire. Fond du Lac FirAe Chief Peter O’Leary said the fire was one of three calls his department responded to last Thursday for unattended cooking fires, but the other two were simply smoke scares.

He said this one began because someone was heating up a pan of oil to cook French fries and left it. “Unattended cooking fires claim a lot of lives. They destroy a ton of property,” O’Leary said.

The family of five living in the apartment were able to get out through a window on the ground floor apartment because, O’Leary said, they had an exit plan. “They didn’t panic. They knew the way that they would normally come out wasn’t available. If they would have stayed in there, it could have been fatal.”

Walls of the apartment were blackened by smoke, doors of a refrigerator were melted, as was a smoke detector halfway down a hallway adjacent to the kitchen. The smell of smoke permeated the apartment. Property manager Justin Christian said about 25 people living in the eight apartment units in the building were displaced at least for the weekend.