You are here: Home / News / Republicans celebrate and strategize 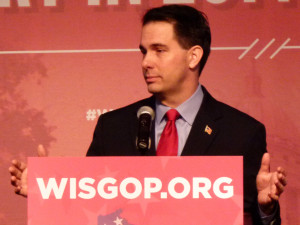 Republican activists hear from an all-star line-up Saturday at the Republican Party of Wisconsin state convention in central Wisconsin.

Governor Scott Walker promotes the party’s accomplishments over the past two years and looks to the future. “We need to continue to show the people of Wisconsin that the ‘R’ next to our name doesn’t just stand for Republican, it stands for reformer,” he says, “and we’re gonna continue to push reforms that make our state a better state to live in, to work in, to play in, to grow up in, to some day retire in because we love Wisconsin.”

Walker talks about his party’s agenda, including food stamp reform, tax cuts, and education — and that includes vouchers. “We’re the ones who care about education in this state because we care about the students in the class room, not about the education bureaucracy.” Walker also pushes entitlement reform — transitioning people from government dependence to true independence, he says.

At the Patriot Center in Rothschild, just outside of Wausau, Republican National Committee (RNC) Chair Reince Priebus keynotes the event. The Wisconsin native tells convention-goers that everyone needs to be on the team, that includes conservatives, libertarians, tea party, liberty movement, and people who don’t wear a label, he says, but “we need to grow,” saying, “we’ll either succeed together or we’ll just lose together. It’s our choice.”

Priebus says the party has to do things differently, but Republicans can’t and won’t change their principles. “Some would have us turn into Democrat light, but I refuse.”

Referencing the recall elections as a result of Republicans votes on collective bargaining, Senate Majority Leader Scott Fitzgerald tells the crowd the elections didn’t turn out the way Democrats expected. “But what you have today in Wisconsin is a new Senate majority that has established itself from the ashes and the ruins of chaos to become of beacon of the Republican Party, not just hear, but nationwide.”