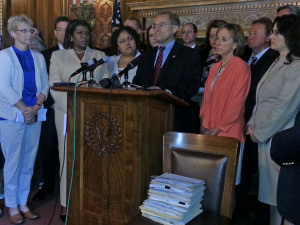 Following what may have been the shortest budget debate in state history, the state Assembly on Wednesday signed off on the two year $70 billion spending plan less than two hours after lawmakers took to the floor.

Democrats had drafted more than 200 amendments to the bill. Assembly Minority Leader Peter Barca (D-Kenosha) seemed to catch Republicans off guard when, after speaking against the bill for about 40 minutes, he announced Democrats would not introduce their proposed changes. Instead, he called for a vote right away.

Following the vote, Republican leaders were critical of Democrats for deciding not to debate the bill. Majority Leader Scott Suder (R-Abbotsford) said he was shocked by the decision, but was not surprised that Democrats “retreated” and simply chose to go home.

Speaker Robin Vos (R-Rochester) said Democrats only offered empty rhetoric with no specifics, deciding to “take their ball and go home” instead of offering their vision for the state of Wisconsin.

Democratic leaders argue that’s far from true though. Leader Barca said the decision not to offer amendments was made after Speaker Vos told his caucus that there would be no changes to the budget bill beyond a Republican-backed technical amendment, which was adopted Wednesday morning. The only other amendment brought to the floor was from state Representative Brett Hulsey (D-Madison), which was rejected on a voice vote.

The technical amendment was a sticking point in the start of the debate even getting underway, after issues with drafting a final version of the changes held up the start of Tuesday’s floor session for more than six hours. The final version of the amendment was introduced this morning. It includes a number of revisions to school choice programs, high capacity well regulations, and about two dozen other provisions.

The state budget bill now heads to the Senate, which is expected to begin its debate on Thursday morning. Democrats say they are hopeful that moderate Republicans in that chamber will push for additional changes.